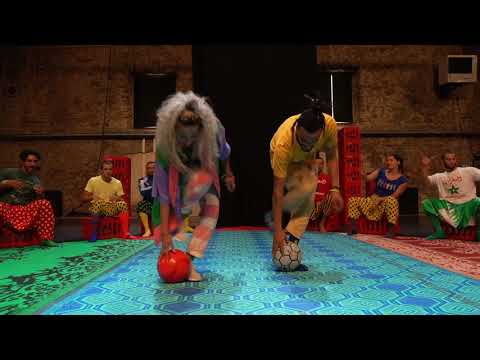 In this exciting new creation, the most prominent company in the Moroccan circus throws into the arena fifteen young artists from various acrobatic universes - dance, break, or even taekwondo and footfreestyle.

After a series of prestigious collaborations around the world, the Groupe Acrobatique de Tanger meets here one of the major figures of today's circus, Maroussia Diaz Verbèke, and the colorful universe of Moroccan photographer Hassan Hajjaj.

A great mix of humor, popular culture and acrobatic virtuosity! Harem pants with polka dots, flashy t-shirts and sneakers, unusual decorations… It's a flood of color and energy that hits the stage. Behind these impressive human pyramids and other circular acrobatics, fifteen moving bodies divert the traditional codes of the circus, to the rhythm of Dj Key.

Chosen after a large hearing organized across the country, they are the embodiment of an urban youth who awakens bodies and consciences.

Recognized as the “master of pop-art in Morocco”, his country of origin which he left for London at the age of 11, Hassan Hajjaj is influenced by nightclubs and hip-hop scenes as well. and reggae of the city as through its North African heritage.

This exhibition traces his encounter with the Acrobatic Group of Tangier during the creation process of the FIQ show! (Awake!), In 2019, for which he created the scenography and costumes.