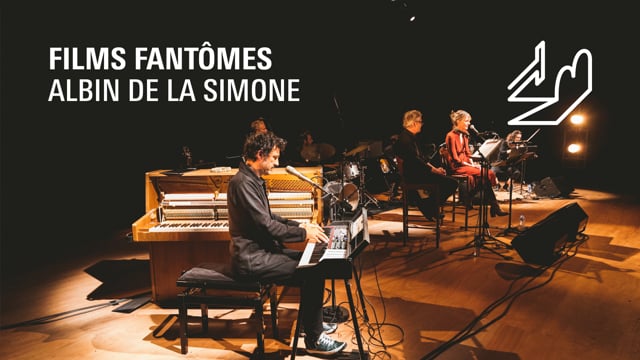 In 1981, the novelist Hervé Guibert published L’Image fantôme, a book in which, without the shadow of an illustration, he wrote his relationship to photography. The author, composer and performer Albin de la Simone takes over in his own way and invites us to a comical pact: his Ghost Films will never exist, commitment made, but you will be able to discover them through a concert and an exhibition.

Offering to imagine films rather than watching them, the artist seated at the piano, shares the stage with 2 actors and 5 musicians. Together, they and they give birth to 9 films that we will not see. From American super-production to French author's film, via Costa-Gavras-style political film, these fantasized feature films run through a history of cinephilia.

For its part, the exhibition designed by Albin de la Simone, with the help of Clémentine Deroudille and Perrine Villemur, is the attempt to materialize Ghost Films. Costumes, posters, derivative products, reviews or videos, from the micro-sidewalk to the dubbing session: like investigators, you will follow in the footsteps of these purely fictitious works ...

A funny and playful dive into the pure imagination, which questions the construction of our representations and our intimate relationship to the image.