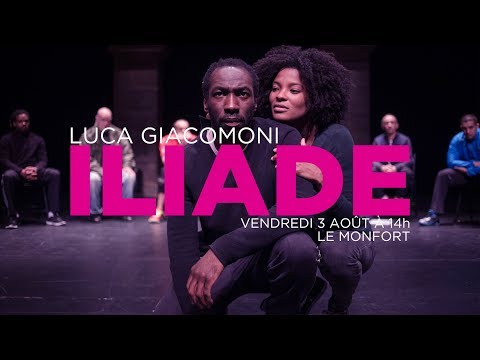 with 4 pauses (20 minutes each) and 1 HOUR Intermission

Food available at the venue

Metros will be available at the end of the shows

ILIADE is an new collective show, which brings together on stage : professional actors, current and former prisoners.

They carry altogether the voices of Agamemnon, Ulysses, Hector, Achilles or Helen and question the causes of the abuse of power, the attack on human dignity and the desire for revenge. The fidelity to an ideal, the sense of friendship, the beauty of intelligence will all be questioned during this unpublished integral of 10 episodes of ILIADE.

A powerful and uncluttered show, like the work initiated by Luca Giacomoni in 2015 with a group of prisoners from the Meaux Penitentiary Center. Luca Giacomoni keeps working on myths and uses Homer’s tale to take a closer look at the mechanisms of conflict - with oneself, with the other, with society - which echo the experiences of prisoners and make us face the paradoxical movements of our world.

In partnership with Le Monfort